Through our research, knowledge, associations and contacts Naturally Cancer Free is able to tap into and explain approaches to cancer that are outside the conventional western medical model of chemotherapy, radiation and surgery. In doing so, we can also put people in touch with cancer survivors who have used various holistic methods.

Unfortunately orthodox medical research and the politico-medical industry have progressed to the point where some of their principles have become quite disturbing, and more people are beginning to lose trust in, and respect for, the health-system itself. It may be valid that the majority of orthodox medical practitioners are motivated people who genuinely care for the well-being of their patients.

We do indeed believe that most orthodox medical practitioners are dedicated, overworked, even heroic champions of the restoration of their patients’ health. However their training, the medical system inside which they function, and the mammoth institutional corporations that fund, support and control them, direct them into a mindset that allows only a very narrow range of views to be held. Although there are a growing number who do step outside the box for their patients.

A special issue in August 2013 of The Journal of Law, Medicine and Ethics makes these points very clear, in its article Institutional Corruption & Pharmaceutical Policy. It is recommended that you download and read the article for yourself, to give you the context of why we believe the community needs organizations such as Naturally Cancer Free, and others, to provide the support for people to become empowered to take responsibility and participate in their own health care.

The article makes it very clear there are significant issues in the areas of overall systemic problems in the medical system, medical research, medical knowledge and practice, marketing, and patient advocates. Here are some of the key points:

“Today, the goals of pharmaceutical policy and medical practice are often undermined due to institutional corruption—that is, widespread or systemic practices, usually legal, that undermine an institution’s objectives or integrity.”

“As a result, practitioners may think they are using reliable information to engage in sound medical practice while actually relying on misleading information; they may then, prescribe drugs that are unnecessary, harmful to patients, or more costly than equivalent medications. At the same time, patients and the public may believe that patient advocacy organizations effectively represent their interests while these organizations actually neglect those interests.”

“Most physicians consider themselves to be rational and objective, and consequently fail to recognize how susceptible they are to commercial influences due to self-serving bias, rationalization and cognitive dissonance.” “Pharmaceutical firms are well aware of these human foibles and often apply principles of social psychology to influence physicians.”

“Many patient advocacy organizations (PAOs) accept funding from pharmaceutical firms in order to finance their activities, but dependency on that funding creates conflicts of interest that can bias PAO advocacy toward the interests of pharmaceutical donors.”

Typically research by pharmaceutical companies is directed towards finding profitable (ie, patentable) drugs to add to their offerings while focusing on increasingly narrow definitions of benefits. Rarely is research done simply to determine the best or even good treatments for patients because there is frequently no way to recoup the investment through the sales of proprietary products.

Randomized controlled trials have been held to be the “gold standard” in pharmaceutical research, but a growing body of evidence in orthodox journals has identified their limitations. Such trials have in fact validated a number of drugs that have later been found unsafe and withdrawn from the market or had warnings issued because of adverse effects that randomized controlled trials failed to uncover. Recent examples include Vioxx, Avandia, Posicor, Wellbutrin, Depakote, Accutane, Reglan, and Nuvaring. In 2003, the head of GlaxoSmithKline stated that more than 90% of drugs only work in 30% to 50% of people.

Fortunately There Are Proven Alternatives

Both Traditional Chinese Medicine and Traditional Indian Ayurvedic Medicine have been shown to be sustainable health systems that support most of the world’s population well before our contemporary ‘scientific’ medicine. Their hypothesis over thousands of years is entirely holistic, natural, and evidence-based by observing and discovering what actually works.

Throughout evolution not only humans have the capacity to make associations between taking medicinal plants and feeling better. A surprising number of wild creatures have figured out ways to use herbs, resins, and even alcohol and nicotine for health’s sake. For example:

We humans seem to have discarded much knowledge passed down to us over countless generations. We have lost most of the past knowledge of health, and instead today rely solely on the scientific medical industry, to the extent where most of us know very little, if anything, about our own body and health maintenance.

At Naturally Cancer Free we maintain high respect for science and especially the advances in knowledge of biology and physiology. By combining this useful contemporary scientific knowledge with the holistic, natural, and evidence-based principles of thousands of years of traditional medicines we believe there are significant advantages and untapped benefits to be gained in health and wellness. These benefits would not likely be realized by strict adherence to the present scientific medical commercial model alone. This applies particularly to society’s most common chronic diseases, especially cancer.

Unlike the apparent present medical industry model, it is our belief that caring, and not money or politics, should be the primary motivational force. With that in mind we set out to provide you with the knowledge, understanding, support and tools that empower you to take an active role in the restoration and maintenance of your own health and wellness. 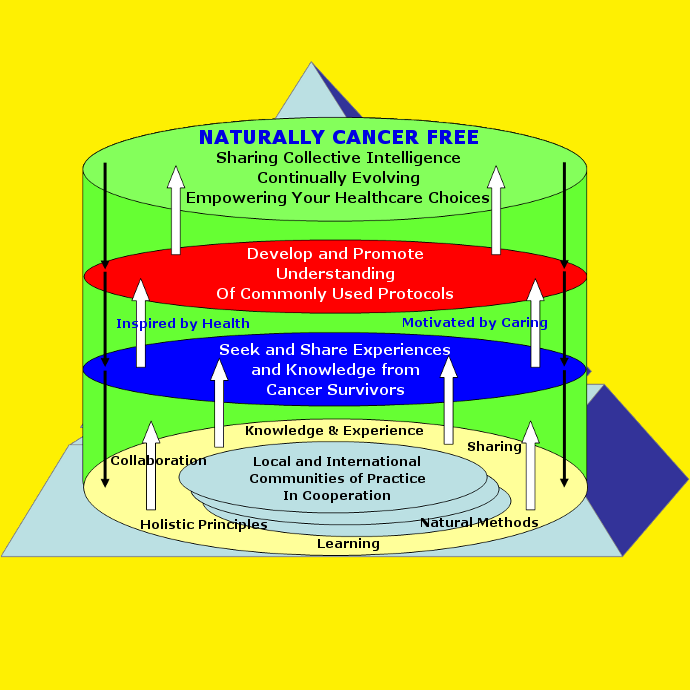 We are part of a locally and internationally networked community of practice, with passion and common interest in finding, understanding, sharing and providing what is actually working for people in helping them to resolve their own challenging health situations involving cancer, based on natural and holistic principles.